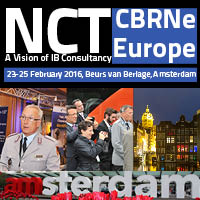 Building on previous conferences and exhibitions in The Hague (2012), Leipzig (2014) and Brussels (2015), NCT CBRNe Europe 2016 will welcome again a large range of European CBRN Defense Commands, Fire Departments and decision-makers from Central and Eastern Europe as well as the USA.

This year, the three-day event will include a live CBRN response exercise, followed by a conference on case-studies and capability building measures as well as a large industry exhibition with state-of-the-art solutions, and the famous NCT Party.

We have 502 guests and no members online