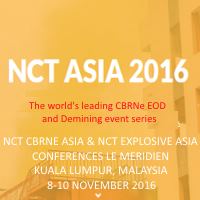 and again includes a live CBRNe exercise and training with the Armed Forces, followed by a two-day conference and exhibition. With traditionally high-level speakers from all over the region, NCT CBRNe Asia is a conference not to be missed.

NCT CBRNe Asia events are established and leading regional CBRNe event in Southeast Asia. After the successful events in Thailand, Malaysia, and Cambodia, this year's NCT CBRNe Asia will return to Malaysia. This fifth edition of NCT CBRNe Asia will be again the largest CBRN Defense and Civil Protection networking forum in Asia.

Since 2012, NCT CBRNe Asia is assembling each year around 300 delegates from over 30 countries in order to discuss regional challenges in preparing and dealing with CBRN incidents. NCT CBRNe Asia is thereby an outstanding opportunity to meet CBRN Defense Commanders, Fire Marshalls, Police Special Forces, Government Representatives and internationally known experts from all over the Asian region. Especially in Asia where CBRN related challenges are vast and disasters comparatively frequent, the establishments of a regional CBRN response community is of utmost importance.

We have 935 guests and no members online