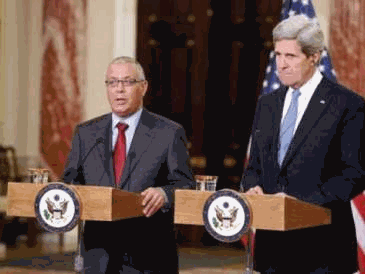 Secretary of state will hold talks with British foreign minister and meet Ali Zeidan to discuss worsening security situation. Secretary of state John Kerry will fly to London from Geneva on Sunday to meet British and Libyan officials, the State Department said.

Kerry arrived in Geneva on Saturday to join talks between six major powers and Iran about reining in the Iranian nuclear program in exchange for easing economic sanctions on Tehran. Foreign ministers from Britain, China, France, Germany, Russia and the United States attended the discussions.

The US and some of its allies suspect Iran of using its civil nuclear program as a cover to develop atomic weapons. Tehran denies this, saying its program is for purely peaceful purposes such as generating electricity.

Kerry's planned departure for London, where he will meet British foreign minister William Hague and Libyan prime minister Ali Zeidan on Sunday, suggests that the Iran nuclear talks may wrap up by Sunday, though lower-level officials could stay at them.

State spokeswoman Jen Psaki said Kerry and Hague would talk about topics including Syria, Iran, and Middle East peace. With Zeidan, Kerry planned to discuss the security situation and political reforms in Libya. More than 40 people died earlier this month in the worst street fighting in the Libyan capital Tripoli since the fall of Muammar Gaddafi two years ago.

Zeidan's armed forces have struggled to control militias, Islamist militants and other former fighters who refuse to surrender their arms after helping to oust Gaddafi in a Nato-backed revolt. Libya has sought to bring the militias under control by putting them on the government payroll and assigning them to protect government offices. But gunmen often remain loyal to their own commanders and battle for control of local areas.
The US ambassador to Libya, Chris Stevens, and three other Americans were killed on 11 September 2012, when militants attacked a US diplomatic mission in the eastern city of Benghazi.2013-11-23

We have 498 guests and no members online