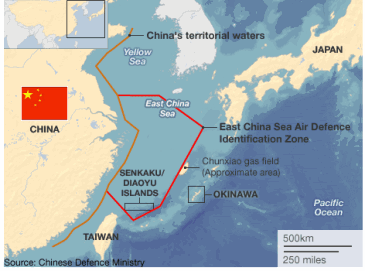 China has demarcated an "air-defence identification zone" over an area of the East China Sea, covering islands that are also claimed by Japan. China's Defence Ministry said aircraft entering the zone must obey its rules or face "emergency defensive measures". The islands, known as Senkaku in Japan and Diaoyu in China, are a source of rising tension between the countries. Japan lodged a strong protest over what it said was an "escalation".

"Setting up such airspace unilaterally escalates the situations surrounding Senkaku islands and has danger of leading to an unexpected situation," Japan's Foreign Ministry said in a statement.

Taiwan, which also claims the Diaoyu/Senkaku islands, expressed regret at the move and promised that the military would take measure to protect national security.

In its statement, the Chinese Defence Ministry said aircraft must report a flight plan, "maintain two-way radio communications", and "respond in a timely and accurate manner" to identification inquiries.
"China's armed forces will adopt defensive emergency measures to respond to aircraft that do not co-operate in the identification or refuse to follow the instructions," said the statement.
It said the zone came into effect from 10:00 local time (02:00GMT) on Saturday.
State news agency Xinhua showed a map on its website covering a wide area of the East China Sea, including regions very close to South Korea and Japan.
Responding to questions about the zone on an official state website, a defence ministry spokesman, Yang Yujun, said China set up the area "with the aim of safeguarding state sovereignty, territorial land and air security, and maintaining flight order".
"It is not directed against any specific country or target," he said, adding that China "has always respected the freedom of over-flight in accordance with international law".

"Normal flights by international airliners in the East China Sea Air Defence Identification Zone will not be affected in any way." The islands have been a source of tension between China and Japan for decades. In 2012, the Japanese government bought three of the islands from their Japanese owner, sparking mass protests in Chinese cities.
Since then, Chinese ships have repeatedly sailed in and out of what Japan says are its territorial waters. In September this year, Japan said it would shoot down unmanned aircraft in Japanese airspace after an unmanned Chinese drone flew close to the disputed islands. China said that any attempt by Japan to shoot down Chinese aircraft would constitute "an act of war". Last month Japan's defence minister, Itsunori Onodera, said China's behaviour over the disputed East China Sea islands was jeopardising peace. BBC World Service East Asia editor Charles Scanlon says the confrontation over the small chain of uninhabited islands is made more intractable by conflicting claims for potentially rich energy resources on the sea bed. But the issue has now become a nationalist touchstone in both countries, making it hard for either side to be seen to back down, he says.

We have 764 guests and no members online