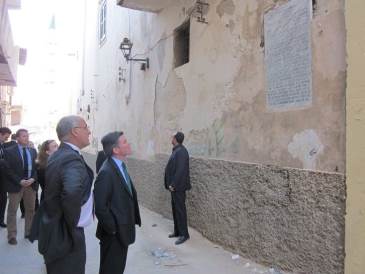 FCO Minister of State for the Middle East and North Africa, Hugh Robertson, arrived in Tripoli on Monday for his first visit to Libya since taking up the position last month. His visit focused on the UK’s support for the Libyan security, justice and defence sectors.

During his time in Tripoli, Mr Robertson met the Libyan Prime Minister, the Deputy Foreign Minister and the Justice Minister. Today Mr Robertson visited a Tripoli hospital and met with a number of injured protesters and their families.

I’ve met several people here who were hurt while demonstrating over the last few days and I’ve been humbled by their courage and determination in standing up for what they believe. This underlines the urgent need to strengthen the Libyan Army and the Libyan Police and for them to take responsibility for security and law and order. I’m here today to reiterate the UK Government’s support for the Libyan people and to the Libyan security, justice and defence sectors which are essential to ensuring a more stable, democratic and prosperous Libya. I’ve also been discussing with Libyan leaders the need for all sides to work together on an inclusive political settlement to ensure Libya’s democratic transition.

During his visit, Mr Robertson discussed the current political, security and economic situation, and looking at how the UK can further assist the Libyan Government and General National Congress in overcoming the challenges Libya faces.

We have 1218 guests and no members online