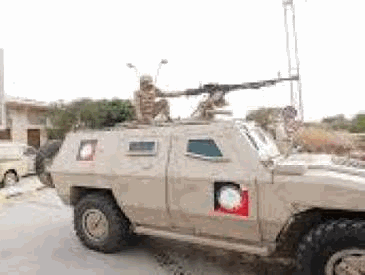 Clashes between the Libyan army and the Ansar al-Sharia militia in the eastern Libyan city of Benghazi, in which nine people were killed, came to an end on Monday.

Libya's Interior Ministry said that at least nine people had been killed and 49 injured in the clashes, which erupted on Sunday night.

Earlier Monday, medical sources said the clashes had left three Libyan soldiers dead and six others injured, while militia sources said that two militiamen had been slain and another wounded.
Three civilians were also injured in the clashes, including one in critical condition.
The clashes stopped when militiamen pulled out of the fighting zones, an Anadolu Agency correspondent reported.
Benghazi's military ruler, meanwhile, has imposed a state of emergency and summoned military personnel to their respective units.
In earlier statements to AA, a spokesman for Benghazi's Joint Security Chamber threatened that any armed convoy entering or exiting the city without prior notice would be targeted by airstrikes.
Libyan Special Forces spokesman Meloud al-Zewi said that clashes had erupted between the army and the Ansar al-Sharia militia late Sunday.
"The clashes started at a checkpoint run by Ansar al-Sharia in the Baraka area amid heavy exchanges fire," he told AA. "A Special Forces post came under heavy fire during the clashes, which prompted troops to return fire."
Ansar al-Sharia, however, tells a different story. A group spokesman denied that its members had been responsible for the recent outbreak of clashes with the Libyan army in Benghazi.
"We did not pull the trigger first," militia spokesman Muhanad al-Enezi told AA. "We were only responding to army gunfire that targeted us."
Earlier this month, clashes between protesters and militiamen left 46 people dead and 519 injured in Tripoli, pushing authorities to call for the withdrawal of all militias from the capital.
Libyans have struggled to restore order to their country since the death two years ago of longstanding strongman Muammar Gaddafi.
The transitional government and its security forces, meanwhile, have struggled to contain the armed militias that helped overthrow Gaddafi but which held onto their weapons after the 2011 uprising.

We have 1494 guests and no members online