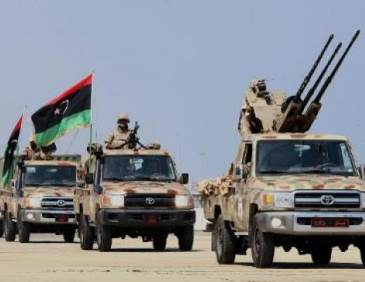 Libya's military swept into the capital Monday with dozens of pickup trucks mounted with anti-aircraft guns in an operation to drive out militiamen, met by a warm welcome from Libyans seething with anger against the numerous armed groups running rampant in the country.

Libya is seeing its strongest public uproar yet against militias, which have fueled chaos nationwide since the 2011 fall of longtime leader Moammar Gadhafi. The heavily armed groups, some of them made up of Islamic militants, have defied control by the weak central government, carving out fiefdoms, acting as a law unto themselves, and imposing their control.

But the move to rein in militias risks detonating an explosive backlash leading to outright battles between pro- and anti-government militias. Since many of the militias are rooted in specific cities, any violence could pit city against city in this already fragmented nation. Monday's sweep was the most assertive yet by the military, but the government's armed forces and police remain weak and underequipped and rely on allied militias for firepower.

Drivers honked their cars and flashed V-for-victory signs in a show of support as the army troops moved into Tripoli, set up checkpoints and roamed the streets. On mobile phones and through TV networks, the Defense Ministry urged people to help and support the army.

Essam al-Naas, spokesman from the Joint Operation Room, a security body under the prime minister, said that as the military deployed, militias from the western city of Misrata, withdrew from their positions in four districts of the capital and returned to their city.

Sporadic gunfire was heard in eastern Tripoli, in an area called Wadi al-Rabie, or the Spring Valley, when members of the Misrata militia fired on a Tripoli-based militia that was demanding they surrender their weapons before leaving, al-Naas said. There was no immediate report of casualties.

The army's move came as the United States on Monday announced it would train up to 8,000 Libyan soldiers, aiming to bolster the military. In Washignton, Defense Department spokesman Col. Steve Warren said the U.S. will train the troops in Bulgaria on basic, general purpose skills.

Libyans' anger was stoked when militiamen opened fire last Friday on an anti-militia protest in Tripoli, killing at least 43 people. Protesters were demanding the removal of militias to allow police and army to be the sole force in the streets. The next day, another militia attacked a military base, sparking clashes that left four dead.

The deadly attack prompted a three-day strike in Tripoli by residents to show anger at the militias and prompt the government to act against them. On Monday, the second day of the strike, the city was quiet and only essential services such as bakeries, gas stations and hospitals.

Gomaa al-Mashri, a security expert who was previously an officer in Libya's police, said he expects violence — but that the popular uproar could mark a turning point. He said it "will sweep the government, the parliament and the militias all together and Libyans will start all over again."

"The country is moving into the right direction. But this is the price we have to pay," he said.

Libya's militias originated in the "revolutionary" brigades that fought against Gadhafi's forces in the 2011 civil war. Since Gahdafi's ouster and death, they have refused to disarm and have grown in size and power. Too weak to disarm the militias, the military, police and government have tried to co-opt them, paying them to take on security roles such as guarding districts, facilities, and even polling stations during elections.

But the policy has backfired, empowering the militias. They continue to act as armed vigilante factions with their own interests, sometimes turning political feuds into armed conflicts. They have become notorious for imposing their own laws — including strict Islamic rules — in areas under their control, as well as engaging in kidnappings, extortion and gunbattles in the streets.

Misrata — Libya's third largest city — is not the only city with a militia arm in the capital. Tripoli has been divided up into fiefdoms between rival militia groups that originated from different cities and towns. For example, the main militia of the western city of Zintan — which was the first to sweep into the capital to oust Gadhafi — still has a powerful presence in Tripoli.

The militias often justify their role, saying they must impose security with the state so weak, and they argue that they were the strongest resistance during the civil war, paying the price with thousands killed and wounded, while Tripoli remained loyal to Gadhafi nearly to the end.

In reaction to public anger against its militias, Misrata's city council decided to withdraw its armed groups from Tripoli but also called on ministers from the city to withdraw from the central government in a show of protest. It was not immediately clear if the ministers would respond to the order.

There is a worrying precedent for militia backlash against public shows of outrage. Last year, protesters marched against militias in the eastern city of Benghazi, after an attack on a U.S. diplomatic mission in the city killed the U.S. ambassador and three other Americans. Since that time, Benghazi — Libya's second largest city — has seen constant violence and lawlessness, with frequent assassinations, car bombings and kidnappings.

As the Misrata militia began its withdrawal from the capital, Libya's deputy intelligence chief Mustafa Nouh was released on Monday, a day after he was abducted by gunmen as he was leaving the airport in the capital, Tripoli, a security official said.

It was unclear who had abducted Nouh, whose family is originally from Misrata. A man who left the airport with him but managed to escape abduction said Nouh was snatched by gunmen traveling in three cars.

The security official, who gave no further details on Nouh's release, spoke on condition of anonymity in line with regulations.

We have 352 guests and no members online