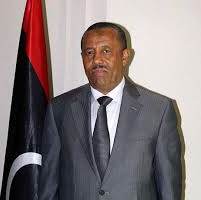 Making his first media appearance since his appointment as Minister of Defence in August, Abdullah Al-Thini said that his Ministry had “put the train on the track” regarding the creation of a Libyan army.

During questioning at Congress earlier in the day, the government was accused of always saying that they are planning to do this and will be doing that – without ever actually doing anything.

Firstly, he said that the army is having new blood pumped into it with the input of new young recruits.

In order to facilitate this new injection of young recruits, Al-Thini said that the retirement law was being activated, noting that there were still some on active duty who were over seventy years old and many over sixty. These had to be retired in order to make room for new blood, he explained.

The second example of action by the Ministry of Defence, Al-Thini said, was the reorganization of the military units. He explained that many existed simply on paper and were fake units and that there was a lot of duplication of military personnel.

He explained that over 170,000 military personnel were actually receiving wages, whereas in reality nowhere near this number actually existed. Al-Thini did not, however, give an exact number of the actual size of the current Libyan army.

With regards to the often made conspiratorial accusation that either the government or the GNC or both, were actually secretly obstructing the creation of an army, Al-Thini said that in all honesty he had found no obstruction to his Ministry of Defence’s work.

On the subject of the hour; the continuing insecurity in Libya’s second city Benghazi, the Defence Minister gave some more details. Al-Thini said that the Benghazi Joint Security Room (BJSR) had been re-organised.

“It had a flaw in its make-up”, he explained without giving too much detail. He personally confirmed live on air that a new military governor, Colonel Awad Al-Saiti, had been appointed, as had been reported by Libya Herald.

Al-Thini declined to refer to Al-Saiti as a military ruler or commander, saying that the military governor or supreme head had more limited powers on civilian authorities than would be in a normal case of a military zone. His exact powers were still to be fully decided, he indicated.

Asked what was different about the new make-up of the BJSR, Al-Thini said that troops protecting Benghazi would now have no other distracting commitments and only one chain of command.

It will be noted that there have been numerous efforts to streamline and coordinate the security hierarchy in Benghazi before, but without much success on the ground, as the continuous bombings and assassinations have shown.

Early indications of initial reaction of some members of Congress to what the Defence Minister Al-Thini had proposed to Congress seem positive. Two of the most critical Benghazi-based GNC members of the government’s handling of the security situation in Benghazi, Sulaiman Zubi and Ahmed Langhi, seemed cautiously hopeful that this latest security plan for Benghazi might work.

We have 370 guests and no members online