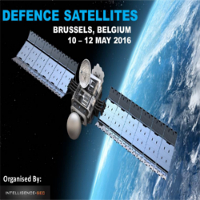 With an increase in the use of satellites being used by the armed forces to support combat operations and intelligence missions overseas Defence Satellites will provide you with an in-depth view of European Space capabilities.

With many military budgets being cut it is becoming tougher for nations to support allies in overseas missions. Many governments support military satellite imagery and surveillance operations to assist allies in combat missions overseas. This is a large shift in previous support militaries used to do as the cost to too high to send troops on the ground and provide air support. Military Satellites are now the first option many governments offer. With this shift there is a greater need for nations to have the most efficient space capabilities and security.

Our inaugural Defence Satellites conference and exhibition will also discuss how leading European Agencies are advising and supporting EU Space Programs and Missions. With military budgets being stretched to the limit there is now more collaborations taking place in space programs, which will be discussed with a focus on the smaller European nations who are working together to build their space programs and capabilities.

With more satellites in orbit many European agencies have to monitor national satellites from colliding, meaning situational awareness is a pivotal part when launching new satellites into orbit.

To take part in our international Defence Satellites event either as a speaker, sponsor, exhibitor or delegate please email us at This email address is being protected from spambots. You need JavaScript enabled to view it. or call us on +44(0)1582 346 706.

We have 759 guests and no members online