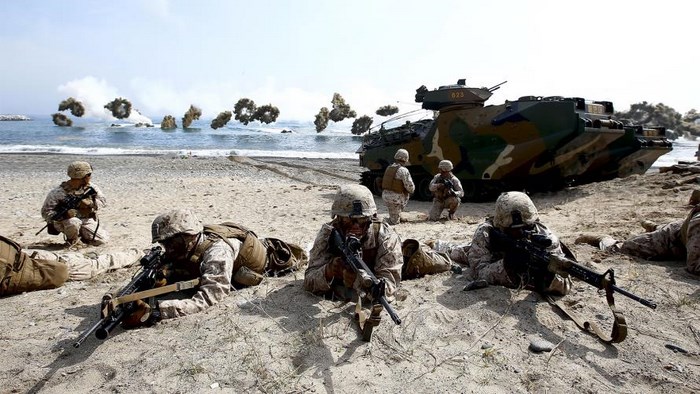 The rules of combat engagement are defined as a set of principles adhered to by the units of the armed forces of the state in cases of military confrontation, armed conflicts and military operations, as well as during the state of mobilization

and preparation for war. It includes military orders that Issued by the higher level on how to act and respond to the hostile party regarding the operations of violating the borders, airspace or territorial waters of the state when it is exposed to the risk of armed conflict and war with another party.

NATO defines rules of engagement as directives issued by an official military authority that delineates the conditions and limits in which the armed forces are allowed to initiate or continue the engagement. Military leaders bear primarily the responsibility to ensure that their forces respect the rules of engagement. Many forces have actually worked for some European countries with the rules of engagement. In its joint operations in the world, as well as the multinational forces operating under the supervision of international organizations.

The military leadership of the concerned country or the concerned party (an alliance or peacekeeping forces) prepares its own rules of engagement before entering into any military operation or mission and determines the conditions for using force, its size in that operation, its location and time, and how it will be implemented with invoking the law of the country and general international law as well as the law The international humanitarian and some chapters of the Charter of the United Nations, such as Chapter VI, are then presented to the executive officials and politicians for approval as an official document issued by responsible parties, the aim of which is to seek to reduce the number of casualties among the military and civilians during combat missions. Thus, the rules of engagement have an important role in controlling the military operation, its objectives and dimensions It is customary for military commanders to distribute the rules of engagement in laminated cards to members of the armed forces, specifying several instructions that include whether the hostile military objective is legitimate or not, with reference to the Supreme Commander to decide on the decision in case of confusion before its implementation, and also not to engage with anyone who surrendered or was injured outside the battle Or because of illness or wounds. The rules of engagement also stipulate that civilians, hospitals, mosques and the founder should not be targeted National buildings, historical and cultural monuments, and areas inhabited by civilians, unless the enemy uses them for military purposes and does not target and strike the infrastructure of the other party, commercial and social facilities, and transportation. Those working with international humanitarian organizations, such as the Red Crescent and the Red Cross, or the United Nations auxiliary teams, and categorically forbidding the appropriation of civilian property, treating them with respect and providing them with assistance and medicine if they are in a difficult situation.

What does the rules of engagement include?

The rules of engagement are concerned with the rules that the armed forces are bound by when using force within military operations, whether in the international, regional or national theater, including armed conflicts between states or within the state itself, as well as within international peacekeeping missions.

The rules of engagement include guidelines on how to deal with a particular military operation that combines military controls and political considerations, and allows the political decision-maker as the highest authority in the state to use force appropriately for the situation, and then work to control the course of the crisis and stop escalation. Therefore, some experts consider the rules of engagement as A major tool that enables the responsible civil authority to ensure the use of the army in its various formations and forces according to specific instructions in a particular military operation. Therefore, it is not only a tactical instruction that guides commanders when carrying out combat operations, but it is an important legal document that outlines instructions, orders, and procedures for engagement, such as regulating the carrying of weapons or confronting For a hostile attack, it can be referred to when the fighting is over, and when trying and litigating before the concerned authorities, especially in cases of war crimes.

It also includes the customary rules in international humanitarian law that govern matters of conflict and armed conflicts, when to respond to the enemy, the duties that fall on those charged with this, and most importantly, that it guarantees the rights of prisoners in a way that secures their lives during combat operations.

It should be emphasized that the rules of engagement are not rigid instructions that do not change in any way, but are modified to conform to the prevailing conditions of military operations and to allow a direct and adequate response to any emergency according to what the military commanders deem to be after discussing it with the concerned authorities. Usually, the rules of engagement change according to the situation that passes It is very important to set the rules of engagement within a legal framework that enables the units of the armed forces to interact with them so that they are clear when using force and initiating engagement with the enemy and so that they are also a legal argument for the implementers of those instructions when dealing with The events are strong enough to resolve the matter.

Violation of the rules of engagement:

In fact, the rules of engagement are exposed to penetration, tampering, and acting irresponsibly, and this matter puts countries in difficult internal and external challenges. Therefore, countries and international organizations have put practical controls to avoid the effects of the breach, in a desire to maintain the peaceful calm that is supposed to exist between the relations of countries with each other, especially the neighbour. Instead of proceeding towards wars and developing the breakthroughs in the rules of engagement, countries resort to a limited response to that breach with the other party, with a warning not to repeat that in order to preserve social, regional and international harmony and peace and to respect the rights of states and their right to protect their territories and establish their sovereignty.

Although many countries of the world, especially the great ones, brag about their respect for the rules of engagement, but at the same time they continue to deliberately violate those rules in their wars and combat operations, and for this there is no justification other than arrogance, arrogance and tyranny in the exercise of force to overthrow and violate those moral rules in wars, which are respected and sanctified by fighters with honor. The examples of this are many, such as the destruction of Hiroshima, the extermination of children in their schools, the burning of rice plantations on the heads of farmers and villagers in Vietnam, the killing of an elderly man with a Hellfire anti-tank missile, and the killing of journalists by helicopters and bombing of civilian shelters in Iraq and others are among the most brutal acts throughout history. Witnessing the violation by those countries of international rules and norms without adhering to the instructions of any recognized rules of engagement and without deterrent penalties for those cases, so that the rules of engagement become a luxury and a dream that even advanced armies do not practice. Performing its duties and preserving their human rights above all else.

We have 449 guests and no members online