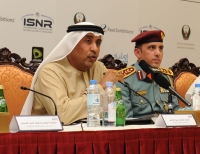 391 Million Dirhams Worth of deals, Abu Dhabi, United Arab Emirates, The Ministry of Interior and the Abu Dhabi Police General Headquarters have signed AED 391,122,304 worth of contracts on the second day of the International Conference for Security and National Resilience (ISNR Abu Dhabi 2016). The announcement was made by Major General Ahmed Nasser Al Raisi, Inspector General of the Ministry of Interior and Deputy Chairman of the Higher Organizing Committee of ISNR Abu Dhabi 2016.

Abu Dhabi, United Arab Emirates: Major General Ahmed Nasser Al Raisi, Inspector General of the Ministry of Interior, Deputy Chairman of the Higher Organising Committee of International Exhibition for National Security and Resilience (ISNR 2016), witnessed on Sunday morning the breaking of the World Guinness record when the biggest ever UAE flag was formed by 3,929 persons.

We have 852 guests and no members online