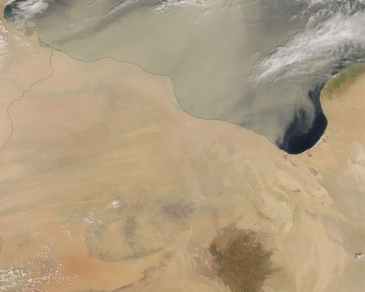 The main extreme weather phenomena that affect Libya are:

These phenomena can cause, directly or indirectly, economic and environmental losses as well as human deaths. For example, Both sandstorms and fog phenomena can severely affect land transportation and take off and landing operations in civil and army aviation, and this may lead to delays as well as disruptions and can cause deadly accidents.

In Libya, weather-related disasters are mainly produced by sandstorms as they affect mainly the whole country. Moreover, the statistical analysis of the frequency of occurrence of sandstorms of 10 synoptic weather stations, which cover nearly the whole country, shows that this phenomenon occurs in almost the whole year in many stations and it becomes more active in spring season. In addition, our analysis shows that April has the highest number of sandstorms in the most synoptic weather stations. Furthermore, our study displays that synoptic weather stations at Tobrouk, Hone, and both Sirt and Gadames have the highest number of occurrence of such phenomenon with annual frequency of 15, 13, and 11 respectively. Both extreme weather phenomena and climate have an enormous effect on military operations. The climate and weather and their extremes have the impact on the design and organization of successful campaigns and training programs. When the campaign and operations are launched in the environments of sandstorms or extreme desert heatwaves these are severely affected by the expected weather and climate. Extreme weather, such as fog and sandstorms can cause delays and disruptions in aviation operations as well as ground transportation, military logistic and support operations and communication facilities. The climatic data should be taken into account when planning and implementing the armed operations and training campaigns. It is those martial operations that deal with:

The army commanders and planners should consider the key relation between weather, especially extremes, and climate and military activities when plan for military and attack operations. And even when carrying out training and routine movement of soldiers. For example, wind

We have 362 guests and no members online