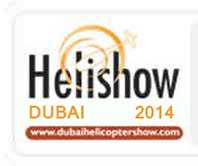 Dubai Helishow - the biennial Helicopter Technology & Operations Exhibition will next take place 4th - 6th November 2014 at the Grand Stand, Meydan Hotel, Meydan Racecourse, Dubai, United Arab Emirates. This will be the Sixth in the series since its launch in 2004 and is held under the Patronage of His Highness General Sheikh Mohammed bin Rashid Al Maktoum, Ruler of Dubai, Vice President and Prime Minister of the United Arab Emirates.

We have 751 guests and no members online