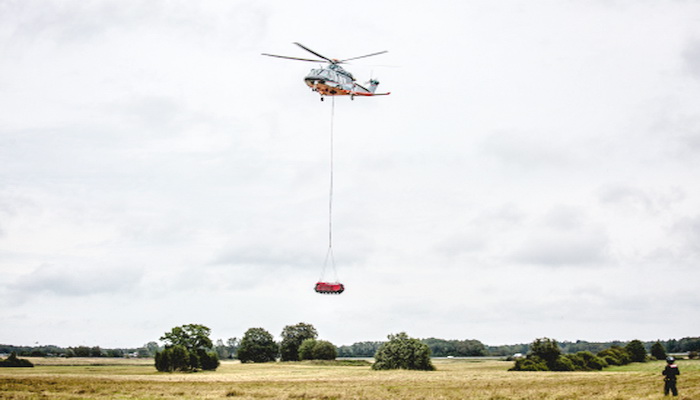 The THeMIS unmanned ground vehicle (UGV) by Milrem Robotics, the leading European UGV manufacturer and developer of robotic warfare solutions, passes air transportability tests that adds one more option for it to be deployed to operation areas

“The most common question about THeMIS size class unmanned ground vehicles is how do you get them to where you need to use them,” explained Kuldar Väärsi, CEO of Milrem Robotics. “We have tackled this question during development of the newest – fifth generation THeMIS - and added a number of options: towing, hauling, following a convoy autonomously and now airlifting,” Väärsi added.

The air transportability tests were conducted according to NATO standard STANAG 3542 and was facilitated by the helicopter crew of the Estonian Police and Border Guard.

The THeMIS is a multipurpose tracked vehicle that can be equipped with other warfighting technology such as weapon systems, tethered drones, IED detection devices and much more. It can carry a payload of up to 1200kg, move 25 km/h and pull other equipment with a force of 21 000 N.

The THeMIS can be remotely operated via cameras or using autonomous functions such as waypoint navigation, follow-me etc. The intention is to keep soldiers safe, increase their capabilities and in addition lighten their load.

Thanks to the systems modularity it has become a very popular choice for different payload integrations and Milrem Robotics has already integrated a dozen different systems with industry partners like Kongsberg, FN Herstal, MBDA, ST Engineering etc.

The THeMIS will be exhibited at DSEI in London from September 10 to 13 and can be found in the following locations:

We have 577 guests and no members online