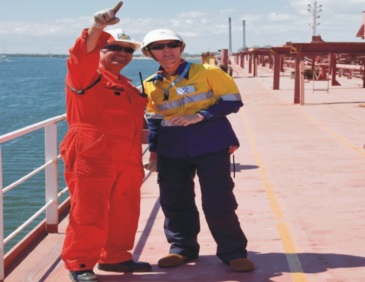 Following the 11th of September 2001, members of the (IMO) agreed by consensus in its twenty second session to take new measures concerning safety of ships and port facilities. - The safety committee in its extraordinary first session on November 2nd to speed up the setting and approval of appropriate safety measures and prepare for the diplomatic conference.

The diplomatic conference concerned with marine which convened safety approved in London on December 1st, 2002 new codes in the international agreement for safety of souls in the sea (SOLAS 1974), thus the (ISPS CODE) was approved in effort to reinforce marine security. The new codes make for the framework through which ships and seaports utilities can cooperate to undercover and find ways to deter any acts threatening security. The code includes the base and measures for ship and seaport safety and regulations concerning marine authorities,departments and local companies. The code included necessary amendments on chapter 15,16 of the Solas agreement by which compliance became obligatory on 1/7/2004. The Solas amendments are summarized as follows: - Amendment of fifth chapter (v) regarding aviation safety to fulfil requirement for mechanic identification system (AIS & LRIT). The chapter 11 amendment (xi) for special measures of improving marine safety and security, divided into two sections: 1)Chapter 11-section one/ concerning marine safety special improvement measures 2)Chapter 12-section two/ concerning special measures for improvement of marine safety and activation And issuance of ISPS for ship and port facilities security Objectives of ISPS Code:

1. Rules of chapter 2-xi Solas 1974 agreement and codes of this ISPS apply to ships and seaport utilities.

2. Establishing an international framework through which cooperation between contracting governments and all of their concerned parties.

3.Defining roles and responsibilities assigned to contracting governments and their parties

4.Securing all information relation to safety and exchange them at early time and in good form.

5.Securing to a satisfactory state existence of sufficient marine safety measures to the required level.

6.Preparing a methodology to implement safety evaluations insuring the finding of plans and measures which give way to reacting to the changing safety levels. Practical Requirements to Achieve ISPS Objectives:

1.Collection and assessment of information on security threats and exchanging this information with the concerned contracting governments.

2.Complying with defining protocols which regulate communication of ships and port facilities.

3.Prohibiting individuals without access from boarding ships and port facilities and areas which are only accessible to certain individuals.

4.Prohibiting any non-licensed arms or explosives or firing equipments in the ships.

6.Making it obligatory to prepare security plans for ships and port facilities based on security evaluations.

7.Making it obligatory to implement all training and simulations to insure the understanding of security plans and measures. Application: The Code Applies To The Following

1. The Following Types of Ships engaged In International .

We have 503 guests and no members online