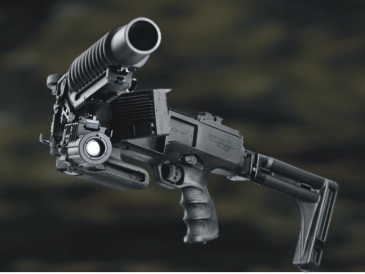 All of military industries created a great development, as result of that a new weapons compatible with computer system and digital communication being produced. Corner shot considered one of these anew weapon, the idea of this system is just trum with movable hinge you could fix a pistol or a machine gun on the front part and on the fixed part you may fix colored VCR camera monitor with the ability of disunite, to observe the target.

The lens of the camera fixed on the hinge, while on the rear part there are the depository of shots, control key, screen, and the cock at the first sight the set telling about it is main purpose which is fight behind walls and surely the Israeli touch seems clearly in manufacturing of the weapon. The weapon is American Israeli made, it takes three years in designing and manufacturing and they start the production in may 2008 with price stating from 3000 to 5000 according to the equipment and the type of weapons that the set outfitted like Bretta pistol 92 which is used by USA army, glock and colt pistols or rifle m_16 or bomb ejector.The fixed camera increase the gauge of vision starting from 370 to 730 meter regarding to the accuracy of it and it could be supplied with; IR system for night vision, moreover there is an ability for direct transmission to the operation center in many countries the gun considered as good one by the police and special units as far as the gun designed by experts in the war against terrorism. The system allows to move the weapon lift and right or forward, also enable the user to search for target in corners safely via the video camera which send the pictures to the screen that is fixed to the set, with high level of accuracy to enable the user to detect rooms and narrow lanes in streets without exposing the user lift to risks according to one of the experts in the war against terrorism who is also one of this system inventors, he said "I think that a corner shot system war against terrorism, since its protect the users and increase their chance to stay alive and dealing with the targets from save sites". This system designed to clash with enemy from left to right and or up and down that gives the ability to change the position of shooting rapidly without the need of remove the hands of the weapon. Thus it reduce the time of the reaction and increase of shooting accuracy in sudden fight cases, simply the corner shoot system enable the user to shoot behind rampart. Characteristics of the weapon: *suitable for all pistols type used nowadays. *Another model with bomb ejecter M203 measurement 40m with one shoot, however monitor with special net for aiming is fixed. *Camera with view screen liable to disconnect. *Folding grip. *Sound concealer could be used also the system has rechargeable battery and quick changeable. Kinds of corner shot system : 1) CSM system: The best type of common and automatic pistols might be fixed to this model such as (Glock, SigSauer, Beretta) and now the special units and anti-terrorism units. CSM turn your pistol to a rifle with shot pipe with capability of move and round in many directions, more over the system gives the shooter the ability to rapid control of directions. The system designed to be easy to clutch with the above mentioned pistols, and an american telescope with flash in addition to laser beam in order to confinement targets, on the left side of the gun a video camera with special standard for hard use. 2) CS-40mm : This system support the movement of the pipe to the left and right up and down and depend on the basic characteristics of c5m system with intensification of fire range and average in addition to bomb ejector 37m standard it is designed at first for governmental organization, guard agency and security services. 3) CS-5.56mm system: Designed for cities war regarding to the high accuracy of the system and the standard of ammunition 5.56mm, 7.62mm and 9mm more over the ammunition of M-16, M-4, Anti tanks and soldiers, and penetrating of ironclad doors. 4) CS-Paint NLS (Non-Lethal solution) system : This system (Non-Lethal solution) depending on the regional corner shot specification, particularly to match A-5 tippmann machine gun. It's used successfully to dominance the crowds and to cuell the unrest by using the pressed pepper balls, and it could be used with coat balls in training corner shot is a great achievement, for the military foundation to decrease the soldiers losses happening every day at battles front the question here is; did we need this system to protect our soldiers? We left the answer to the experts and leader ship and the answer must be with yes, if they really care about their soldiers life.

We have 1163 guests and no members online