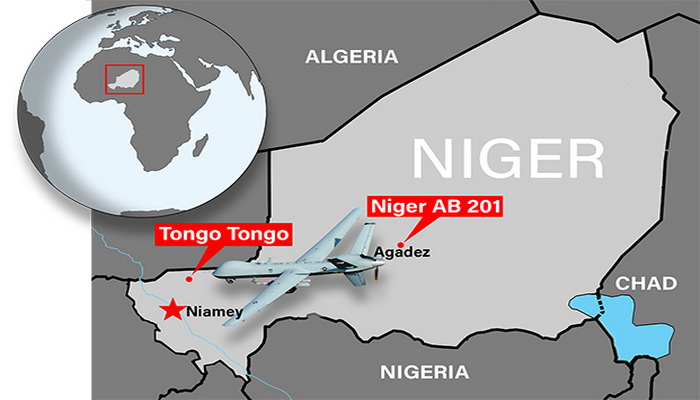 A new pattern of U.S. air operations is emerging in West Africa and a site that seems to have a great horizon in the world of war and politics, it's Air Base 201, which is located about 5 km southeast of Agadez, which is classified

as the largest U.S. drone base outside the United States. A spearhead in the face of increased terrorism in the sub-Saharan And Northern Sahel region, where many terrorist organizations are trying to find shelter in that strategically important region. 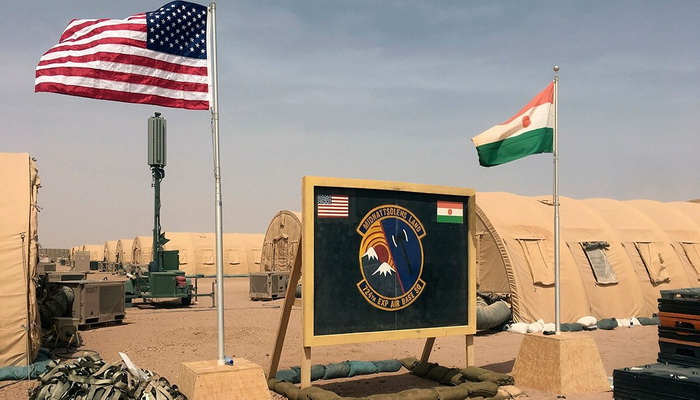 Air Base location is distinctive. The intervention in these areas, which are more tense across the continent and also because of the geographical and strategic flexibility it provides for counter-terrorism efforts, is being intervened.

The site was formerly a small base used by the Nigerian army and in accordance with joint Niger-U.S. agreements authorized by the Government of Niger, which was approved for construction in 2014 and began construction in the summer of 2016.

U.S. Air Force documents submitted to Congress in 2015 indicate that the United States negotiated an agreement with the Government of Niger to allow the construction of a new runway and all associated docks, facilities and infrastructure at the site adjacent to Niger Air Base 201 south of The City of Agadez, where The local government has given the green light to use its airspace to launch and operate drones from the Niamey region in southwestern Niger, where it is expected to target areas and outposts where terrorists are stationed in the Agadez region of central Niger and deep west and north Africa. 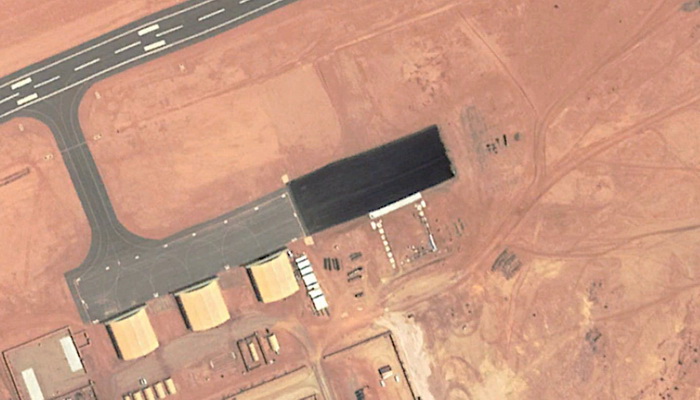 In February 2013, former U.S. President Barrack Obama ordered the first 100-strong U.S. military contingent to be sent to Niger to assist in drone reconnaissance in Niamey, Niger's capital, to support a French-led operation to fight ISIS. Al-Qaeda and groups loyal to him in neighboring Mali.

Africom has confirmed that drones are being deployed at Niger Air Force Base 101 and operations will begin from there pending the completion of construction of the new Agadez 201 base.

Construction and construction began, but the costs of building the base increased significantly, and according to the National Defense Authorization Act for fiscal year 2016, including a $50 million request to build an air camp and base in Agadez, Niger, to support operations in West Africa, some U.S. newspapers revealed. Hundreds of Air Force personnel are vitally working to complete this $110 million drone base, but new projections from the U.S. Air Force confirm that the initial cost will soon be reduced given the base's operating price of up to $30 million. Almost annually, but by 2024, when the 10-year agreement to use the base in Agadez, Niger, construction and operating costs will be between $40 billion and $280 million to cover all new facilities and operating expenses. 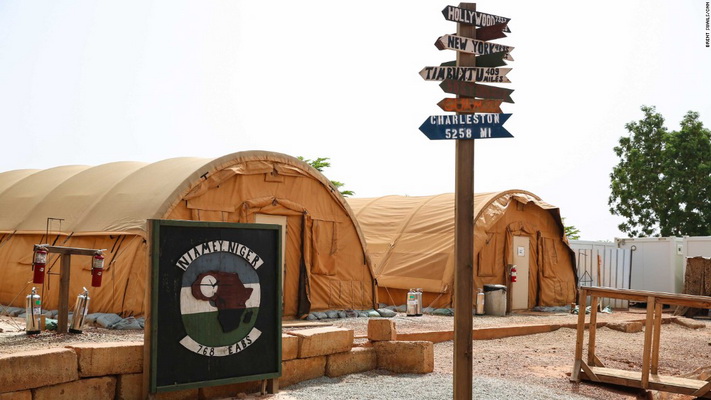 Although the total budget has not changed, the way costs are divided and the construction price has jumped from $50 million to $60 million due to the unexpected effects of austerity conditions and the remote location of Agadez, including the effects of severe weather, the Ministry of Defense justified the dramatic increase, saying that  The need for new security measures in the ocean has increased the cost of establishing the base, and the Pentagon has not discouraged its strategic project. With the presence there, construction continued vitally to complete and base 201 appeared to be one of the largest air bases for aircraft flying out of the United States and NATO countries.

According to Mark Kincade of the Air Force Installation and Support Center, Base 201 in Agadez is now the largest project in the history of the U.S. Air Force, and the cost of its construction breaks the record spent by the Americans in the construction of al-Dhafra Air Base in the United Arab Emirates, an ancient secret aircraft site. U.S. aircraft and van rang air force base in South Vietnam was the record holder in terms of size and operation and had nearly 150 aircraft in 1969 and in general this vital and important military site is part of the expanded U.S. military plan led by Although Air Force Base 201 was supposed to be operational by the end of 2018, weather and other severe conditions delayed the completion of the base. 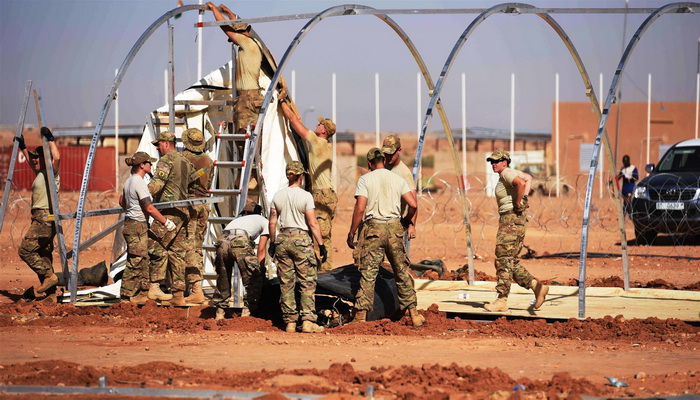 Air Base has many advantages that appear to be located within the United States and not outside, where photographs and videos released by the military show the advantages that are commonly available in U.S. bases of communications media, satellite dishes and service centers. Entertainment and rows of quant tan tents in the form of air-conditioned houses, lobby halls, library, café and restaurant serving various American meals also have gyms.

These amounts spent by the American leadership to build the base of 201 certainly are offset by a great benefit, and in general, Nigerian voices of activists and intellectuals have emerged asking for clarification sought clarification on the quality of that relationship between a country that leads the world and one of the poorest countries in the world. The American presence reflects a policy that has not yet been clarified and may be a concern for everyone, the extremist movements growing their presence on the continent may one day reach to hit that base in its own right, so it should always be aware of that and keep in mind that the Americans have put that city and their base in a state of A permanent war and they have to expect results that are not always satisfactory.

The importance of Base 201 comes in terms of being the largest U.S. air base in Africa and the region and also as a spearhead of advanced air operations against a number of foreign organizations designated as terrorist organizations by the U.S. State Department and in line with the strategy Intelligence, surveillance and reconnaissance with current and emerging threats to Niger, Chad and Central Africa extend to Libya and strategically important areas of the region.

The base is being prepared to be able to accommodate a large C-17 aircraft and other transport aircraft such as 130 C-130, ISR (intelligence, surveillance and reconnaissance) and armed drones MQ-9 drones, which will be able to reach a number of West and North African countries."

The 409th Air Expeditionary Group and the 411st Civil Affairs Battalion are currently stationed at the base.

At the completion of its construction, according to preliminary information, about half of the 800 U.S. military personnel stationed in Niger will be sent.

The military operations were not affected by the delay in al-Qaeda's readiness for military operations, but the pace of U.S. military operations in North and West Africa has increased significantly, starting from The Nigerian Base 101 in the capital Niamey, Africom continues its raids targeting terrorism, a year ago 2016 The United States has carried out hundreds of drone strikes targeting al-Qaeda and ISIS militants, including a series of attacks terrorism targeting Libya and U.S. forces working alongside Nigerian forces in the fight against terrorism.

"The base is probably one of the most remote U.S. military bases ever," said Dan Gittinger, director of the Center for the Study of Drones at Bard College and author of the guide to determining the rules of drones from the satellite. The us. military presence in Niger is the second largest in Africa after the only permanent U.S. base on the continent, Djibouti, the small country of the century. African.

The mission of U.S. forces in Niger is the most prominent, as the U.S. Defense Foundation has been trying to minimize casualties among its soldiers since the October 4th attack -- which killed a number of special forces soldiers in Mali and an attack on a joint  patrol at Niger   by Isis's branch known as Islamic State in the Sahara - using drones to hunt down terrorists.

The report noted that the construction of this base for drones is a new chapter in the U.S. war against terrorism, as U.S. strikes against terrorist organizations have doubled in many regions around the world, such as Somalia and Yemen.

He revealed that one of the successful operations carried out by u.S. special forces using drones resulted from the liquidation of a prominent al-Qaeda leader in southern Libya, which indicates an expansion in the monitoring and liquidation of terrorists on the black continent.

The base is a common-use site that accommodates U.S. and Nigerian aircraft and the Nigerian Air Force and the U.S. Air Force have begun to fly in limited flight operations.

The U.S. African Command said in a statement that intelligence, surveillance, reconnaissance and target acquisition operations from The Nigerian Air Base 201 have begun and that ISR missions "support our partner forces and our international efforts to counter violent extremist organizations in the region."

"The new runway at Nigerian Air Base 201 is a joint-use runway suitable for both U.S. and Nigerian aircraft, allowing for better response to regional requirements and better protection of Niger's borders," Africom says. Support any type of aircraft up to The Globe master III C-17.

Drones at al-Qaeda are expected to target several terrorist organizations such as ISIS, which is deployed in countries throughout the Sahel, a sprawling sub-Saharan region, including the area around Lake Chad, as well as the northern Sahara states, having become north Mali and southern Libya are a terrorist incubator, and northeastern Nigeria is a breeding ground for Boko Haram activities and al-Qaeda is a new chapter in the u.S. and its allies' war against terrorism as no country in the world can today alone fight terrorism. 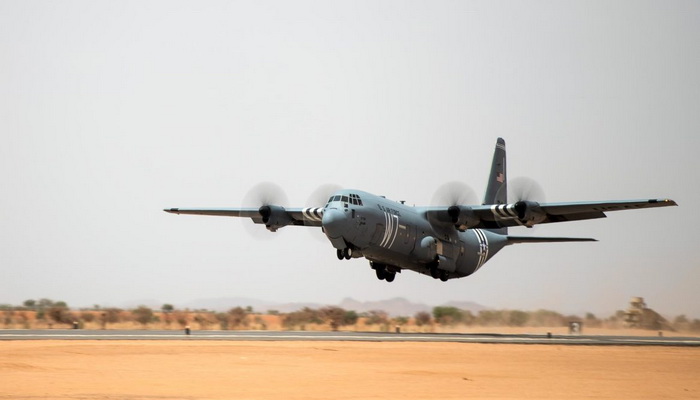 The American leadership adopts a new strategy based on withdrawing its forces from direct confrontation with the enemy, and carrying out sensitive and direct operations deep in the enemy's territories by using drones, as well as emphasizing cooperation and support to its allies by providing advice and support to local partners in accelerating operations through direct information support and conducting Control measures and aerial reconnaissance and the tasks of obtaining accurate targets and then going to attak them with drones or combat aircraft in cooperation with the local partner and this pattern of operations has achieved a lot of success and this is what prompted the American leadership to implement These operations, which save effort, time, are highly effective and flexible in achieving these goals at any time, making these bases "201" the long hand of the American leadership in hitting and combating the locations of terrorist groups in their places and before they move a qualitative shift in the anti-terrorism strategy that transports it from the shadow. And the hidden war to the operations in the light and in the most enlightened places as legitimate operations, in which everyone participates in a unified position for local and international allies to defeat fear and terrorism and achieve security and security in the region at least during this stage.

The question here, which needs a convincing answer, is the reason the American leadership seeks to build such a base and the rapid move towards developing joint cooperation with a poor country like Niger, is it really the fight against terrorism that it creat and spread it, or is it to enhance their presence on the continent? Or is it the product of the feverish race for Africa’s wealth among the great powers, especially after China began entering the continent by various means, dominated by the nature of the economy, which everyone knows must have a strong military presence to secure and protect it, or is it the product of the power craze and the frantic arms race He started anew and looked for spheres of influence in the world through many of its military arms such as Africom, through which the United States seeks to control the areas where its forces are deployed around the world.