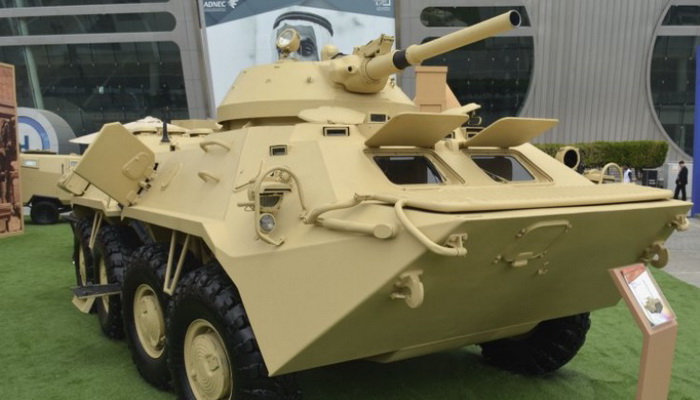 The turret is replaced with one from the Russian BMP-1 infantry fighting vehicle (IFV), armed with a 73 mm 2A28 gun and a 7.62 mm PKT machine gun (MG). To allow the turret basket to be retained complete with gunner’s seat, an additional spacer is fitted between the turret and the hull.

Shareef-3 retains the launcher rail for the Russian 9M14 Malyutka (Sagger) anti-tank guided weapon, although this was not fitted to the vehicle shown at the IDEX exhibition in February.

Aside from the commander, gunner, and driver, the Shareef-3 carries six dismounts seated on two bench seats in the middle of the troop compartment. Dismounts can exit via roof hatches or side hatches between the second and third road wheels.

As with the BTR-70, steering is power-assisted on the front four wheels and a central tyre pressure system is standard.

MIC is still marketing other wheeled armoured fighting vehicles, such as the Shareef-1 8×8, which is a BTR-80A that has a two-person turret armed with a stabilised 30 mm 2A42 dual feed cannon and 7.62 mm coaxial MG