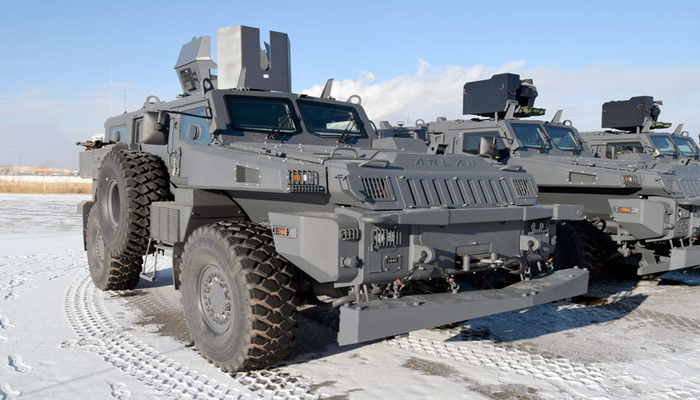 Paramount Group, the African-based global defence and aerospace company, and its joint venture in Kazakhstan, Kazakhstan Paramount Engineering (KPE) have delivered the latest batch of armoured vehicles to the Kazakhstan Special Forces as the company’s local

The latest delivery of the localised version of the Marauder MRAP, the Arlan, will see the vehicles in operation with the Ministry of Defence, Special Forces and other law enforcement agencies. The company has already started production on the next large order for Arlans with further deliveries expected during 2018.

Ivor Ichikowitz, Group Chairman of Paramount Group said: “In less than two years we have built a new state-of-art armoured vehicle factory from the ground up, we transferred skills to establish a highly efficient local workforce, we industrialised a new vehicle, and now we are ramping up production as we further increase deliveries to our customers.

“This is a major achievement of which we are very proud of. It shows that our portable production model works. It shows that with the right partners we can set up production anywhere in the world and deliver world-class technologies to our customers in a fast and efficient way. “

The Arlan vehicle is the localized variant of the Paramount Group’s Marauder MRAP multi-role vehicle. The Arlan has undergone extensive testing in extreme conditions and environments across Kazakhstan, this was followed by a design phase at Paramount Group’s Innovation Centre to fully ‘winterise’ the vehicles.

The Arlans for the Special Forces are equipped with various auxiliary equipment inclusive of various special communication suites, other electronics, roof mounted wire cutting blades, a barricade breaker blade mounted to the front of the vehicle which is hydraulically operated from the driver station. Some of the other features installed include night vision equipment, IR cameras, laptop station and GPS.

The winterisation of the Arlan included some of the following features: Additional heating of the crew cabin, changing specifications of all fluids, lubricants and fuels to an all season type covering a range of 100 degrees Celsius from minus 50 to plus 50 Degrees Celsius, and heated ballistic windows.

We have 1340 guests and no members online